This is part four of my historical series on losing presidential candidates of the last 50 years.  Why focus on the losers? Perhaps it's a selfless attempt to shed some light on some figures that might otherwise fade into obscurity; more likely, though, it's my lifelong fascination with failure, disaster and public embarrassment. This week's subject: the 1984 campaign of Walter F. Mondale, the only man to lose statewide general elections in all 50 states. 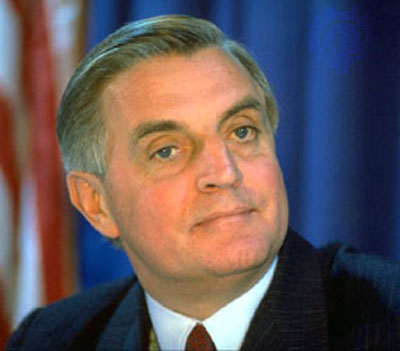 Walter "Fritz" Mondale was born in Ceylon, Minnesota in 1928.  He became involved in Minnesota politics as a young man, helping organize Hubert Humphrey's successful senate campaign in 1948.   By 1960, at the tender age of 32 and just four years out of law school, Walter Mondale was the Attorney General of the state of Minnesota. 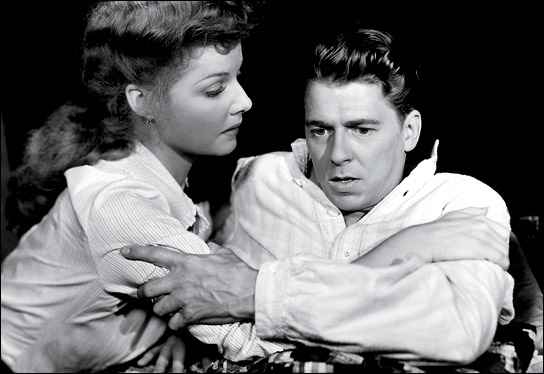 For comparison, at the same age future political opponent Ronald Reagan was in Hollywood pretending his legs had been cut off.

After Humphrey was elected to the Vice-Presidency in 1964, Mondale was appointed to fill the vacant Senate seat and won election in his own right two years later. 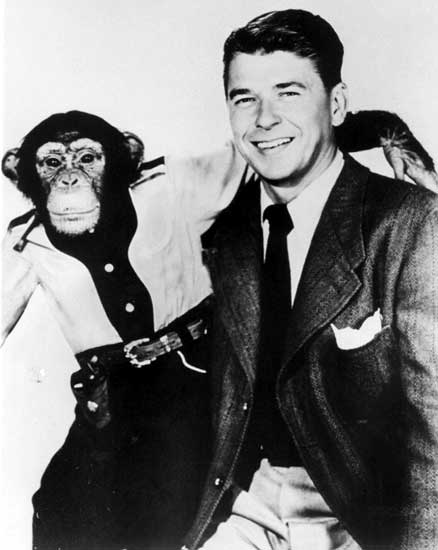 Mondale held that office until 1976, when he was chosen as running mate by democratic presidential candidate Jimmy Carter and won election as the United States' 42nd Vice-President.  He served in that capacity until 1981, when Ronald Reagan was sworn in as president after defeating Carter in the 1980 election.
Mondale spent the next three years firming up his support within the Democratic party and was the front-runner from the beginning for the presidential nomination in 1984.  He did have one serious challenger, a young senator from Colorado named Gary Hart.  Hart was considered a rising young star within the party; good looking, telegenic, energetic, he emerged in the early primaries as a real threat to Mondale.
Where's The Beef?
When it came to scoring political points, Hart's rugged good looks were no match for Mondale's ability to cut through the chaff and disarm his opponent with just a few well-chosen words. Using all its experience, creativity and talent, the Mondale campaign reached out and stole a catch phrase from a popular Wendy's commercial of the day and asked Hart: Where's The Beef?  Yes, Where's The Beef.  It became one of the most famous campaign slogans in history. Truly inspiring. 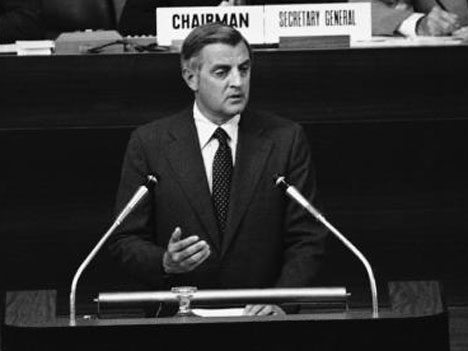 This simple phrase highlighted the worries voters had regarding the young senator: all glitz and surface polish, with no meat underneath. Hart simply had no substance.  There was no "there" there. Mondale waltzed to the nomination. 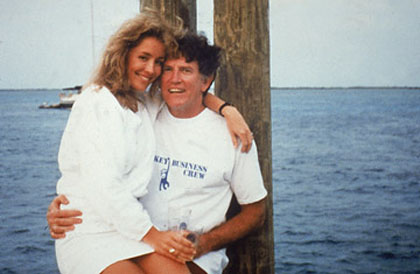 Four years later Gary finally showed us where the beef was.  He didn't win that year, either.

But it's one thing to beat a lesser-known opponent in the primaries; it's quite another to take down a popular incumbent president.  While obviously intelligent and well-spoken, Mondale simply had no charisma.  With a creaky voice and no grand vision to articulate, Mondale just did not excite voters.  How best to engage them under the circumstances?  How to get his message across?
(Note: this author helped conduct a telephone survey for the Mondale campaign in the spring of 1984; the results were illuminating.  Roughly 80% of those polled expressed complete indifference toward Mondale, while all five responded with stunned silence when asked if they were wearing underwear.)
Mondale Throws a "Hail Gerry"
Obviously, Mondale needed to score some points fast.  In this vein, he did what no other nominee of the two major U.S. political parties had done before: he chose a woman as his running mate.
Now, understand that women had run large countries in other parts of the world; Margaret Thatcher was prime minister of U.S. ally Great Britain at that time, among other world leaders. But in America, land of the free, no woman had even come close to taking the reins of power. And this was despite the fact that womanhood comprises nearly one-half of all genders that currently exist in the U.S.
But Walter F. Mondale, needing to "swing for the fences," chose to be the pattern-breaker and selected as his running mate Rep. Geraldine Ferraro of New York. 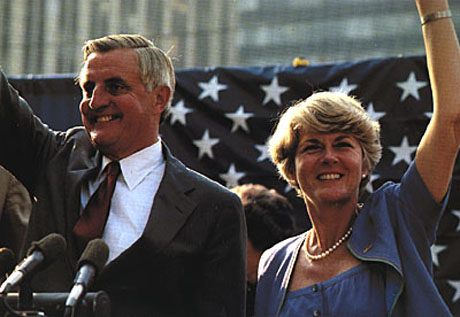 Unfortunately, the United States still harbors a sizable Cro-Magnon population, and many refused to take the newly chosen Democratic ticket seriously.  The Mondale-Ferraro pairing inspired many joke names for the ticket, none of which are appropriate for inclusion in a serious historical review.  The best of these funny names were probably "Wally and the Beaver," "Fritz & Tits," and the popular favorite, "Sir Walter Wally and the Treacherous Snakewoman." 1
What Went So Horribly, Horribly Wrong
Yes, Mondale had his work cut out for him as he prepared to scale Mt. Reagan in the general election campaign of 1984.  Personally popular, congenial, the Great Communicator was going to be a "tough out" in that Orwellian year.  Ronald Reagan at 73 had been in the American consciousness seemingly forever.  He was everybody's kindly grandfather; you liked him, you trusted him, you believed in him; you just didn't want to watch him eat ice cream. 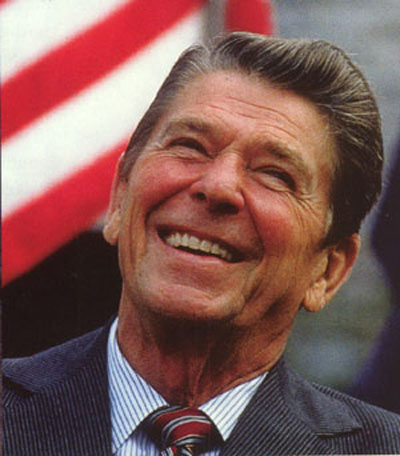 Americans were also feeling better about the state of their country than they had in some years.  Militarily, they had come a long way since that dark day in 1980 when a helicopter crash caused a hostage rescue mission in Iran to fail; under Reagan, military strength and confidence had been restored to the point where having 241 marines blown up in their barracks in Beirut was seen as a mere hiccup.  The economy had also improved; the country's strong economic recovery in 1984 brought about by "Reaganomics" left Americans much more confident than they felt during the bleak, permanently damaging recession of 1982-83 brought about by "Reaganomics."
Reagan was also prepared to do battle on Mondale's home turf: in the war of vapid political slogans, "Where's The Beef?" had nothing on Reagan's "Morning In America" campaign. 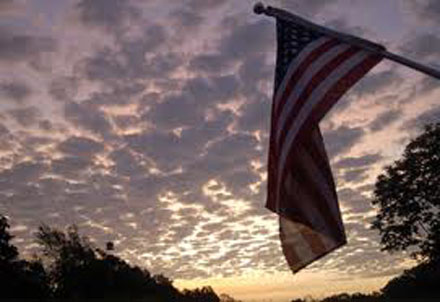 Yes, Ronald Reagan's America was awakening to a bright, new morning, full of sunshine and promise; the soft light washed away all memories of the night before, when America partied a little too hard, threw up on the carpet and pissed on the stereo.  Americans felt good about themselves again.  And Reagan was the perfect icon to lead this "shining city on a hill." 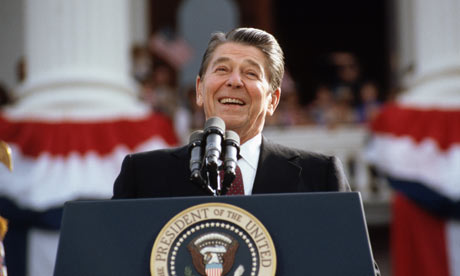 "America is standing tall, because doggone it, we are."
And Mondale probably didn't help matters when he promised to raise taxes after taking office.  Subscribing to the misguided notion that Americans actually value honesty in their politicians, Mondale said to the nation , "(L)et's tell the truth. It must be done, it must be done. Mr. Reagan will raise taxes, and so will I. He won't tell you. I just did." 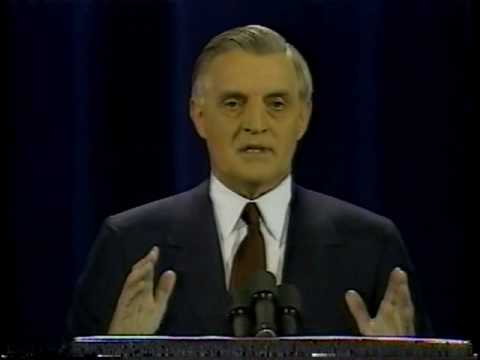 "Not only will your taxes go up, but fuck you."

Reagan proceeded to clinch the election on Oct. 21 with a strong performance in the second debate.  Seeking to defuse the issue of his age, Reagan supplied the signature line of the entire campaign when he quipped "I am not going to exploit, for political purposes, the youth and inexperience of my opponent."  Mondale was 56.
Of course in the world of American politics, "quipped" is short for "delivered a line prepared by a team of highly-paid writers and consultants and calculated to defuse a major issue without actually addressing it." 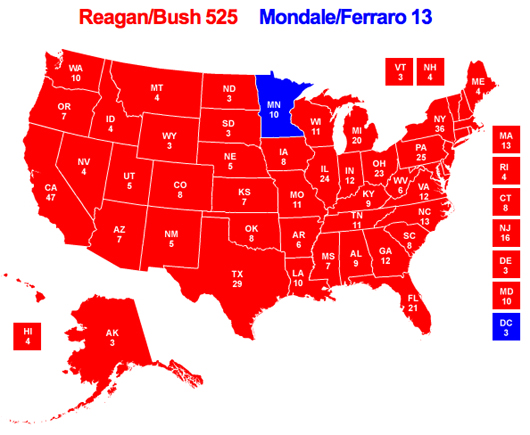 Whoa, that looks bad.
Mondale won the District of Columbia, which never votes Republican; moving west from there, Reagan's Red Tide washed over America like...well, like something that rolled over everyone's shit and drowned the fuck out of everybody.  The final electoral count was 525 for Reagan and 13 for Mondale, the most lopsided defeat in history for a Democrat and the biggest landslide since Alf Landon was handed his head by Franklin Delano Roosevelt in 1936.  That one blue island amidst the sea of red?  That would be Mondale's home state of Minnesota, which he won by the whopping margin of  3800 votes.
Fortunately, Minnesota is used to being ignored and took it quite well.

1  There aren't really any footnotes here.  The numbers are just there to make it look "academic," and this shit is obviously too small to read.

Religion And Other Woo

feralboy12
I am the Ken doll you left outside in 1983. I have been living on cat food and squirrels, coming out mostly at night, unable to wash or even change my clothes because they are permanently sewn on. I ask you, would a merciful God allow this? I just wish I could wipe this stupid grin off my idiot face.